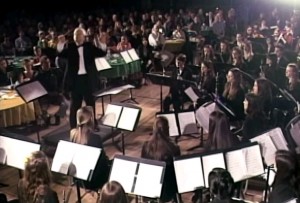 Keep Moving Forward was commissioned by the Foxborough (MA) Music Association in memory of Sam Berns. Sam was a member of the percussion section and a junior at Foxborough High School when he lost his lifelong battle with progeria in January of 2014. Sam’s story has been chronicled in the HBO documentary “Life According to Sam,” and his TED talk has been viewed over 4 million times. An important aspect of Sam’s story is his determination to be a fine musician and a full participant in the music program at his school.

Keep Moving Forward is not a portrait of Sam or his condition. It is a piece of music based on his life philosophy, his enthusiasm, and the spirit of inclusion and solidarity his classmates showed him. “Keep moving forward” was one of Sam Berns’ rules for life, and this work was written not in mourning, but to be the kind of piece he would have enjoyed playing.

Since Sam’s determination to play snare drum in the marching band was so important to him that he chose to share it with millions, the snare drum (and the whole percussion section) are central; the chorus for the most part gets to be its own percussion section. The piece never looks backwards, every change of tempo is for the faster. Ultimately, everyone is swept into the percussion section and everyone has a chance to be a snare drummer in a noisy call and response, after which there is a rhythmic, boisterous and loud celebration. The original version for band, string orchestra and chorus was premiered by the combined forces of the Foxborough High School music department on May 3, 2014, four months after Sam’s passing.

PERFORMANCE NOTES
The original version of Keep Moving Forward was written for band, string orchestra, and chorus. That version is available separately. The parts of the two versions are not compatible and cannot be mixed.

The three off-stage solo snare drummers should be outfitted with marching drums. They should begin at the back of the hall or auditorium and proceed down the aisles toward the stage beginning at measure 127. They can move while playing, or stop to play and move during the rests. By measure 200 they should have arrived at the front of the stage and should play the remainder of the piece from there, facing the audience.

At measure 200, any percussionists not already playing are welcome to double the snare drum parts.

In the choral parts, all x- or diamond-shaped notes are not to be sung, but are spoken, shouted, or whispered based on the dynamic.

Except where indicated, the eighth-note remains constant through meter changes.
Keep Moving Forward is approximately 7:45 in duration.